Rumpus in the Rumpus Room

Rumpus in the Rumpus Room was the third episode of the Season 4 of Maude, the 72nd overall episode in the series. Written by Marilyn Suzanne Miller, the episode, which was directed by Hal Cooper, premiered on CBS-TV on September 22, 1975.

Maude is more than relieved to find out that Walter was in bed with Arthur; they both passed out together after their night of partying. Maude finally decides to step down from the election if it means Walter will become sober again, but it is Walter who has the true change of heart and reconciles with Maude, giving her his full blessing about her role in politics.

Maude and Walter meet at a party celebrating Arthur and Vivian's first wedding anniversary. Maude arrives on the arm of Senator Bob Myers, her political ally, while Walter, arrives on the arm of a young woman named Kathy Griffith (guest star Bernadette Peters) that he met at a bar. Cathy is a lovely woman, but she is not really all that bright. Despite her attempts to meet and greet everyone, she is still angry with Walter for trying to stop her political ambitions.

Inevitably, another fight brews between the warring soon-to-be exes, where yet again, Walter relentlessly demands that she drop her bid and return to being a traditional wife to him. Maude is getting more and more irate because he is still trying to demand that she become again his wife. When she refuses to back down and give in to his relentless blackmail, Walter immediately begins drinking again.

He and Arthur go back to his apartment building, while singing at the tops of their voices, off-key! At that point, the same tenant (again played by Stymie Beard) who insulted Maude, tells them to shut up!

An upset Maude, accompanied by Senator Bob Myers (James Olson), to check on Walter, and seeing him in bed with, whom she thinks is Kathy, but was in reality, Arthur, finally realizes that her marriage is over. She begins to accept that Walter is more interested in what he wants, and that he doesn't care about what she wants. Broken, she returns home, and then puts on a face of being care free. 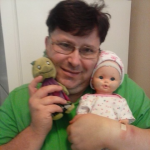